Thank you for all your support this Giving Tuesday to surpass our goal of $3,333! 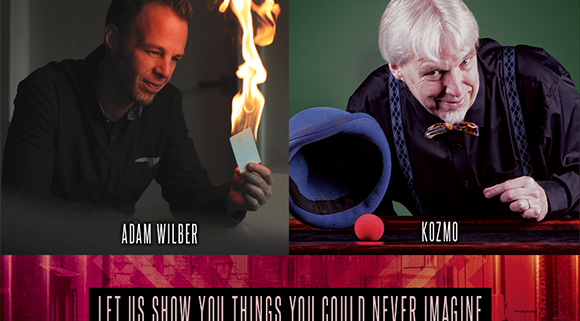 A limited number of VIP tickets are available for $50 in advance.

VIP tickets include: early admission to the theatre, priority seating, and meet-and-greet performances by the magicians at 6:30 P.M.
Seating is very limited. Advance tickets are strongly recommended. This is a family event with a suggested age of 8 years and older.
Magic Beyond Imagination features:

Adam Wilber is a master magician, inventor, and speaker who has been captivating audiences for over two decades. His unique blend of sidesplitting comedy magic and mind reading has won him fans around the world. He has appeared at TEDx, on The Discovery Channel, and has triumphed on “Penn & Teller’s Fool Us.” Adam is the man The Discovery Channel called “The real deal in magical entertainment,” and Penn Jillette called Adam, “A genius!”

Kozmo is a legendary street performer, who has thrilled audiences from Bourbon Street to The Great Wall of China with his hilarious brand of magic. He will keep you in stitches and blow your mind with miracles using ordinary objects. In addition to performing at festivals and on street corners around the U.S., Kozmo has appeared on the Tonight Show and toured China.

With help from the audience, these incredible magicians will give you the gift of new and impossible magical moments beyond your wildest imagination. They have performed for some of the biggest stars in the world and now they are performing for you!

Let them show you things you could never imagine…

General admission and VIP tickets are available online at MBIShows.com